Through Land of Nowhere

Travel to Gobi desert and mountains of Central Mongolia. Vast arid plains, immense sand dunes and dinosaur fossil sites await you in the Gobi. In Central Mongolia you will visit the site of Chinggis Khan’s medieval capital – Karakorum. Its temples and museums will tell you the history of the largest land empire ever known. Explore natural and cultural sights and have their story told by your guide. Experience the nomadic culture which seemingly hasn’t changed for many hundreds of years.

The below itinerary is the basic route the trip will take, but can vary according to the time of season, rainfall, weather and ground conditions.

Meet in UB airport and transfer to a 4 star hotel in the city center.
Afternoon guided tour to some of the city’s highlights:

Extensive granite rock formations surrounded by steppe habitat. Most of the way is on tar road which is then replaced by dirt tracks. Tonight we will settle in a seasonal hotel where instead of rooms you will be accommodated in traditional felt covered gers, also known as ‘yurt’. Sanitary facilities are located separately. Throughout the journey you will stay in the kind of “ger camps”. This afternoon we take a short hike in the granite formations of weird shapes, see birds and possibly wild animals. With extreme luck it is sometimes possible to spot wild sheep (Ovis Ammon). Dinner and overnight.

Drive further south in to the desert. Vegetation quickly thins out and is replaced by vast barren plains. Occasionally you will see white tents of local herding population, their winter sheds and large flocks of sheep and goats, more seldom horses and camels. Our today’s destination is the limestone cliffs of Tsagan Suvraga formed by wind and water erosion. A part of an old sea bed the sedimentary rock here has different colors representing different geological times. On reaching the cliffs we take lunch in a ger camp nearby and explore the area on foot. From the top of the cliffs you will enjoy breathtaking panoramas of the desert expanses.

A couple of hours travel further south will bring you to Dalanzadgad town, a sprawling capital of Mongolia’s largest province. After lunch we continue to Yolyn Am canyon. Literally meaning the “Eagle mouth”, the canyon shelters some snow and ice until late July. At the entrance there is a small museum, a modest introduction to the areas animal and plant life as well as some petrified wood and dinosaur eggs. A leisurely hike to the canyon heart will allow you spot a lot of small rodents, some Bearded vultures and with a bit of luck Wild mountain goats (capra sibirica) scaling steep rock walls. For dinner and overnight we make our way to a ger camp amidst vast open plains.

This morning we explore Flaming Red Cliffs. Here in 1920-ies Americans unearthed the first samples of dinosaur eggs intact in their nests as well as hundreds of dinosaur skeletons among them of several new species. Hike through eroded ravines of red sandstone and make our own discovery. Then we continue Khongoriin Els dunes and settle in a ger camp not far from the dunes. Desert landscapes are especially beautiful in the evening light. At night you can enjoy myriads of stars that illuminate the dome of the Gobi sky.

The Khongoriin Els dunes are 120km long and 3 to 15km wide. From the foothill to the crest of the highest dunes is a good 200 meters. Local people refer to them as to the “Singing Dunes” due to the distinct propeller hum heard on windy days. Today we take an excursion to the dunes. Climbing the highest dune is a “ritual” that will allow you feel the immensity of the desert with spectacular views of its rugged ridges and vast plains. If wished you may also ride two humped Bactrian camels.

Leave the desert behind and we head north to Central Mongolia for which we will cross a couple hundred kilometers of endless arid plains and sandy tracts. Often people call such lands as the middle of nowhere. Around midday we stop at “Tevsh”, an extinct volcano and walk a rugged mountain to explore a unique gallery of rock carvings dated to 7th-1st century BC. They depict various animals, hunting and daily chore scenes of early humans. Tonight we stay in a ger camp nestled amidst the moonscape of a small group of granite formations.

The 2nd son of Chinggis Khan built the capital of the Mongol Empire in the early 13th century. Largely an experiment of city building in a pre-dominantly nomadic culture, Karakorum as it was known then never became a fully functional capital before it was destroyed by invading Chinese Min Dynasty troops in late 14th century. Today the main attraction here is the Erdene Zuu monastery established in 16th century by a Mongol khan as part of his efforts to introduce Buddhism as the main religion. Subsequently, it was almost completely destroyed during anti-religion campaign of 1930-ies with just a dozen temples standing presently intact. We walk the monastery premises and take a glance at a few surviving artifacts of the old capital and perhaps some earthen hills nearby that still contain remains of the imperial capital.

Wooded mountains and lush meadows dominate today’s landscape. Felt walled gers of herding Mongols and large flocks of grazing animals will be a common sight today. En-route we briefly stop at ruins of the 8th century capital of Uyghurs, people who presently inhabit the Xinjiang Region of China but in 9th century came to replace the mighty Turks who had ruled Central Asia for over 200 years. A sizable mud wall with remains of a watch tower can be found here today vaguely reminding of the former glory of the Uyghurs. Upon arrival at the springs we settle in a cozy ger camp where you can relax in a pool filled with the spring water. You may as well take a relaxing body massage for a small additional fee.

A small freshwater lake amidst hilly steppes. Other than just an overnight place, the lake is stopover point for migrating water birds such as Relic Gull, Whooper Swan and several species of geese and ducks.

This low impact ger camp is located at the confluence of Khanui & Balig rivers at the foothill of Dolankhan mountain. The vast spaces of wilderness here are comprised of grassy valleys, wooded mountains, fast mountain rivers and canyons. A small number of local herders that live here depend on large flocks of sheep, goats, horses and yaks. This secluded and uniquely spectacular area became accessible to travelers only three years ago and a wise policy of preserving its wilderness is being enforced by the camp administration. Dinner and overnight upon arrival at the camp.

Accompanied by local guides you may ride horses, hike various trails, explore 3000-5000 year old rock carvings, practice archery skills, fish depending on season and visit local herding families. This will be a first-hand experience of a culture so different from that of the West and almost surely the most interesting part of your time at the camp.

Rightfully one of the best preserved Buddhist architectural complexes in Mongolia, it was built in the first half of 18th century by the decree of Manchu Chin dynasty king, then overlord of Mongolia. It shared the destiny of all Buddhist establishments that were ruthlessly destroyed during political upheavals of 1930-ies with just a dozen of temples surviving to these days. We spend some time in the peaceful premises of the monastery observing life of local monks and then continue to our last ger camp on the tour for dinner and overnight.

Today we drive back to UB. This travel across wooded mountains and fertile soils of northern Mongolia is rather uneventful. Upon arriving in UB take a well deserved rest at your hotel before meeting your support team at good-bye dinner.

Transfer to airport for your return flight home.

LAND Cost per person in SGD :

A deposit of $1500 per person is required upon confirmation and balance to be paid 1 month prior departure.

Price does not include: 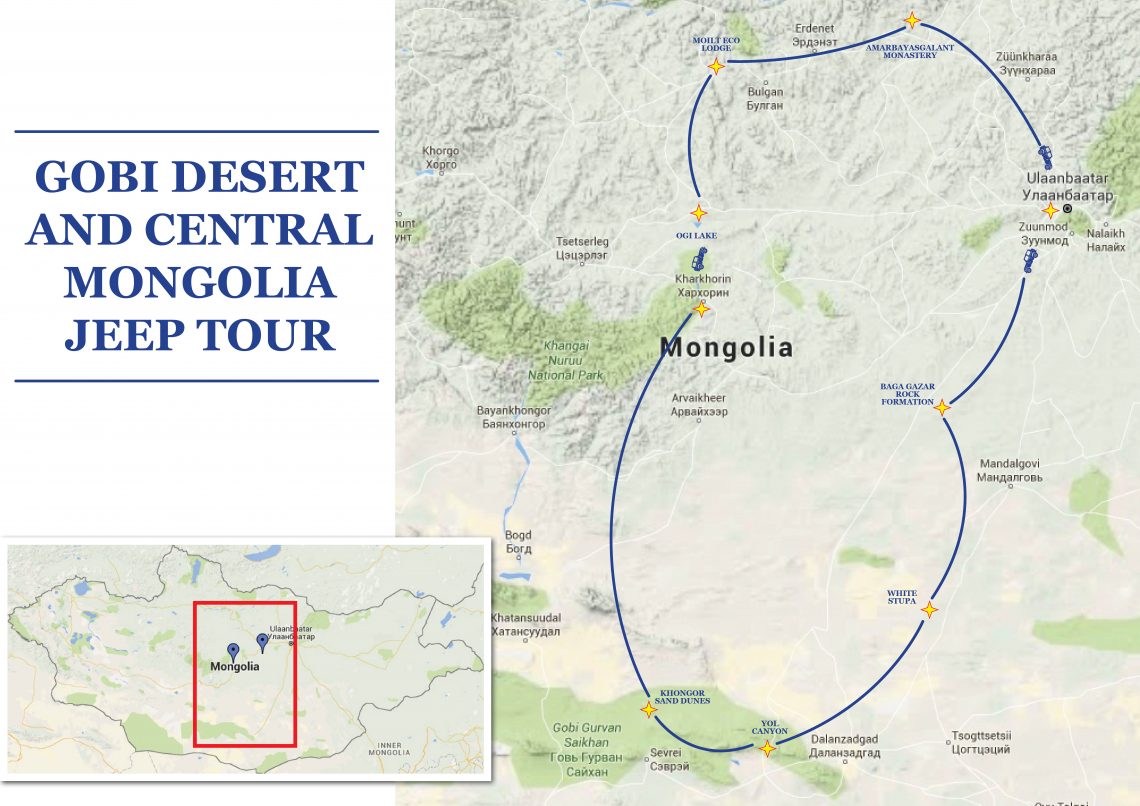