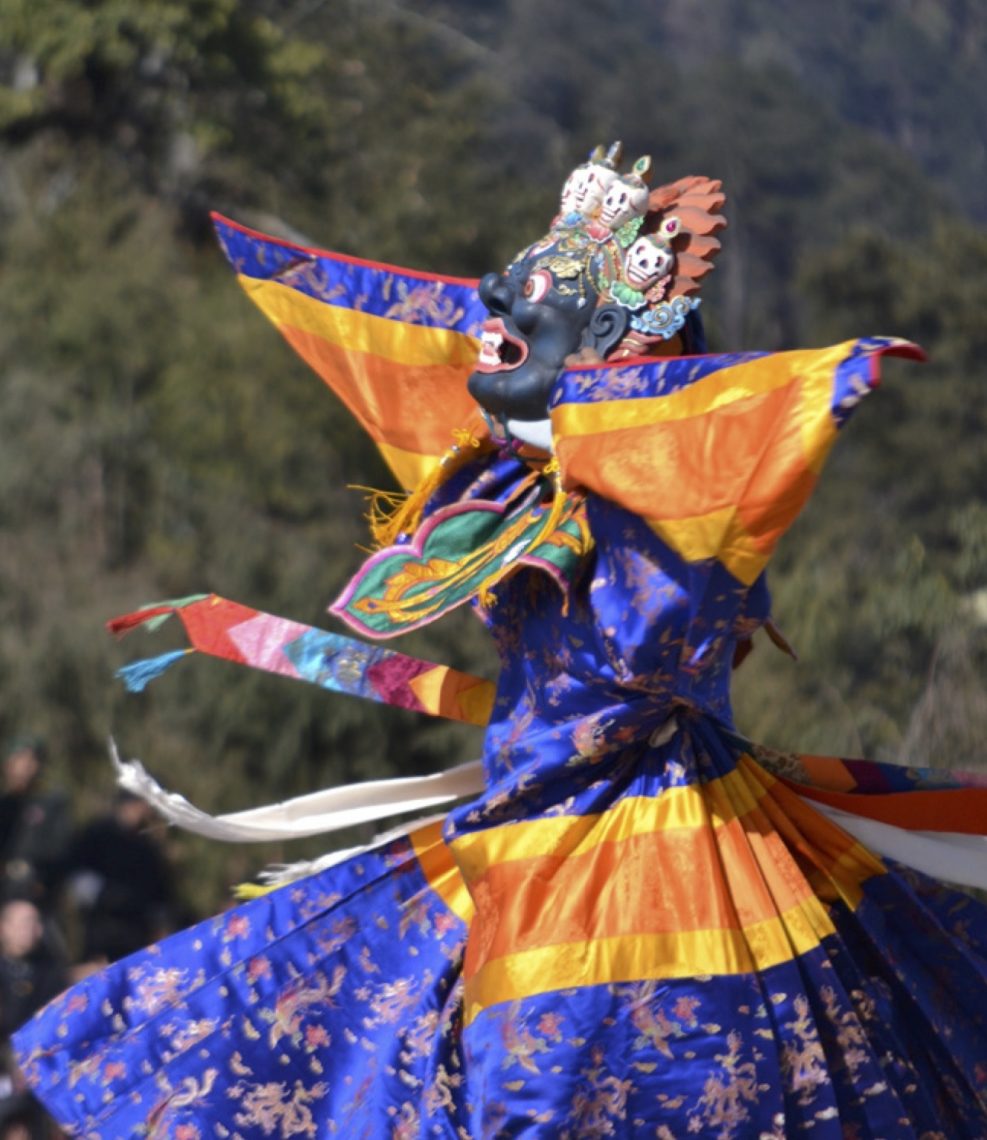 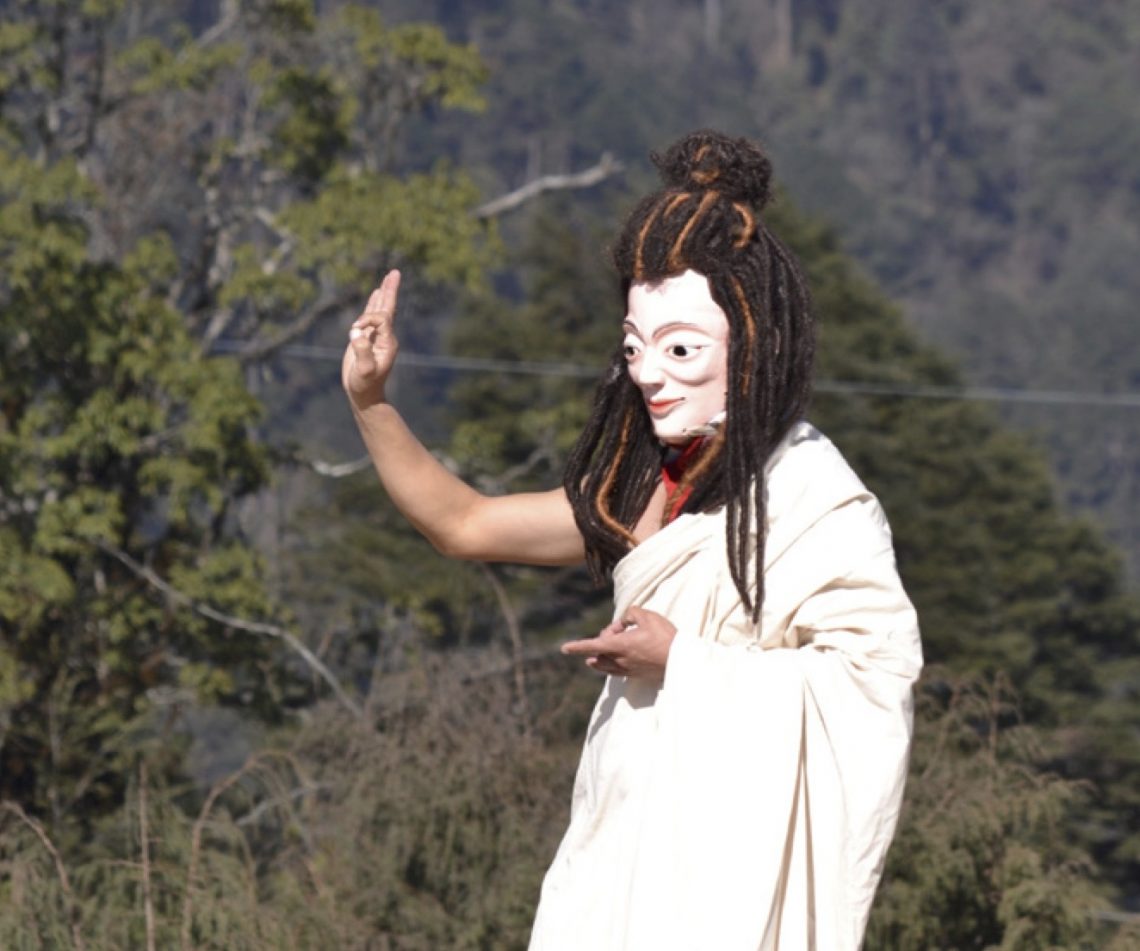 Witness the celebration of traditional Bhutanese culture and faith and Druk Wangyel Festival held in the ground of Druk Wangyel Lhakhang located at Dochula Pass against a stunning vista of Himalayan peaks. This Bhutan tour also explores all of the highlights of Bhutan’s western valleys, including the famous Taktsang Monastery at Paro, Punakha Dzong, and the many sites of Bhutan’s capital, Thimphu.

DAY 01: (12 DEC) ARRIVE PARO – THIMPHU
The flight to Paro is one of the most spectacular mountain flights in the world, with a constantly changing panorama of some of the highest mountains on earth. Our Bhutan representative will meet you at Paro airport exit doors following customs formalities.

After lunch, drive to the capital, Thimphu (1.5 hours) following the Pachu River.  Once a rustic village sitting in a broad, fertile river valley, Thimphu is today the nation’s bustling capital. Enjoy sightseeing, including a visit to stunning Buddha Dordenma Statue, made of bronze and gilded in gold, and the National Memorial Chorten depicting the Buddhist faith in the form of paintings and statues. This temple was first initiated by the Third King as a protection from the negative elements of modernization, and as a monument to world peace. The Royal Queen Mother completed it as a memorial stupa for the Third King who passed away in 1972. Before dinner at the hotel there will be an orientation on Bhutanese etiquette by your guide.

Overnight at Hotel in Thimphu.

DAY 02: (13 DEC) THIMPHU – PUNAKHA (Festival)
Leave Thimphu early after Breakfast up to Dochu-La pass (3,100 meters) to attend the spectacular Druk Wangyel Festival (45 Minutes drive, 22 km). Set amidst this breathtaking backdrop of Himalayan Mountains, the Druk Wangyel Tsechu is an experience unlike any other and truly exemplifies Bhutanese cultural traditions. The Druk Wangyel Lhakhang was built over a period of four years (2004-2008) under the vision and patronage of Her Majesty the Queen Mother Ashi Dorji Wangmo. The Lhakhang honors the courageous service of the Fourth King, who personally led the troops against the insurgents, as well as the regular Armed Forces of the country. The Druk Wangyel Tshechu is a unique festival performed by the Royal Bhutan Army rather than monks or lay people. It is a tribute to the wise leadership ofHis Majesty Jigme Singye Wangchuck, the Fourth King of Bhutan. It also celebrates the continuous efforts of the Royal Bhutan Army in protecting the sovereignty and the stability of the country.

Afterwards drive towards the Royal Botanical Park at Lamperi, which is situated at an altitude range of 2,100m to 3,800m. The park (47 square kilometers), serves as the biological corridor connecting to the Jigme Dorji National Park and Jigme Singye Wangchuck National Park.Continue on to Punakha where you will have the remainder of the day at leisure. Stroll around Punakha town in the evening.

Overnight at your hotel in Punakha.

DAY 03:(14 DEC) PUNAKHA
Punakha was the ancient capital of Bhutan. Visit Punakha Dzong, the “Palace of Great Happiness”. Built in 1637 by the Shabdrung, the ‘Unifier of Bhutan’, Punakha Dzong is situated at the confluence of the Mo Chu and Pho Chu (Mother and Father Rivers). It is the winter headquarters of the Je Khenpo and hundreds of monks who move en masse from Thimphu to this warmer location. The three story main temple of the Punakha Dzong is a breathtaking example of traditional architecture with four intricately embossed entrance pillars crafted from cypress and decorated in gold and silver. It was here in 1907 that Bhutan’s first king was crowned.

After lunch enjoy a walk to Chimi Lhakhang, temple of the Drukpa Kuenly who is also known as the Divine Madman. He inherited the Divine Madman title since he revolted against the orthodox Buddhism in his time. He taught the people that religion is an inner feeling and it’s not necessary that one should be an ordained monk. He is also considered a symbol of fertility and most childless couples go to his temple for blessing.
Overnight at your hotel in Punakha

In the morning drive to Yabesa village and hike to through ricefields and up to Khamsum Yueley Namgyal Chorten, built by her majesty the queen Ashi Tshering Yangdon Wangchuk. Perched high on a hill on the bank of the river, the Chorten houses paintings belonging to Nyingmapa Traditions. Take a picnic lunch on a picturesque riverside before exploring the Wangduephodrang Dzong. Built in 1639 the strategically located Dzong is perched on a spur at the confluence of two rivers.

Drive back to Thimphu where you will have an opportunity to visit handicraft and souvenir stores. Afterwards proceed to Paro, visiting Semtokha Dzong en route. The Dzong, built in 1627, is the oldest in Bhutan. It now houses the Institute for Language and Culture studies. On arrival in Paro, check into the hotel.

Overnight at Hotel in Paro.

DAY 05: (16 DEC)  PARO (TAKTSANG MONASTERY HIKE)
After breakfast we hike to Taktsang Monastery. The trail is broad and the walk of approximately 2 hours uphill takes us to Taktsang Monastery. Built on a sheer cliff face 900 metres above the valley floor, the monastery is a spectacular sight. It is also an important pilgrim site for the Buddhists. Legend has it that the great Guru Rimpoche flew here on the back of a tigress when he brought the teachings of the Buddhist Dharma to Bhutan in the 8th Century. He then mediated in a cave there for three months where the monastery was later built. Nearby there is a teahouse where you can stop for refreshments.

In the afternoon, we drive to the ruins of the 17th Century Drukgyel Dzong, an historic monument built by the Shabdrung to commemorate his victory against marauding Tibetans in 1644. On the return drive to Paro, visit 7th Century Kyichu Lhakhang, one of the 108 temples constructed by the Tibetan king Songtsen Gampo.

Difficulty: Moderate to Hard.
Overnight at hotel in Paro.

Today will drive to Thimphu after an early breakfast to witness National Day celebration in Thimphu at Changlimithang ground with local people.
Bhutan celebrates 17th of December as its National Day every year. The day came to be celebrated as the National Day after Gongsar Ugyen Wangchuck was enthroned as the First Hereditary Monarch of Bhutan on 17 December 1907.

After many interesting cultural and sports activities, the day will end with a Tashi Lebay praying for many more such days in the future. In fact, we all prayed for even happier and more glorious days for Bhutan and the Bhutanese.
Later in the afternoon will visit His Eminence Dorji Lopen Rimpoche, who will perform purification ceremony of THANGKA and conduct LONG LIFE blessing ceremony.

Drive back to Paro and Overnight at your hotel in Paro.

DAY 07: (18 DEC) DEPART PARO
Breakfast in the hotel, then drive to the airport for flight to your onward destination.

Price is subjected to changes without prior notice

The itinerary is intended as a guide only. Local conditions and weather may necessitate variations to the program and can affect the availability of views and panoramas described. Be aware that all times stated are approximate, and may vary with individual and group fitness. If you have any special dietary requests, please let us know in advance. Throughout your stay you have the option to participate in a range of extra Outdoor Activities at an additional charge.

It is strongly recommended that you be insured against medical and personal accident risks (including repatriation costs, air ambulance and helicopter rescue services) and that you also take out cancellation insurance and Travel Agency Insolvency. You should be aware that some policies restrict coverage or do not cover travel to Bhutan and may not cover activities such as trekking (and mountain bike). Please ensure that your policy provides a sufficient level of protection and covers you for the activities involved. You must carry proof of insurance (e.g. your insurance certificate) with you to Bhutan.

X-Trekkers handles the whole booking process on your behalf, including Druk Air / Bhutan Airlines flights. However, the price of flights may or may not be included in the package and it is therefore advisable to book well in advance to secure seats. We also handle visa application processing (included in the package). It normally takes 2 to 3 weeks to process the visa but under some circumstances, we can accelerate the process.