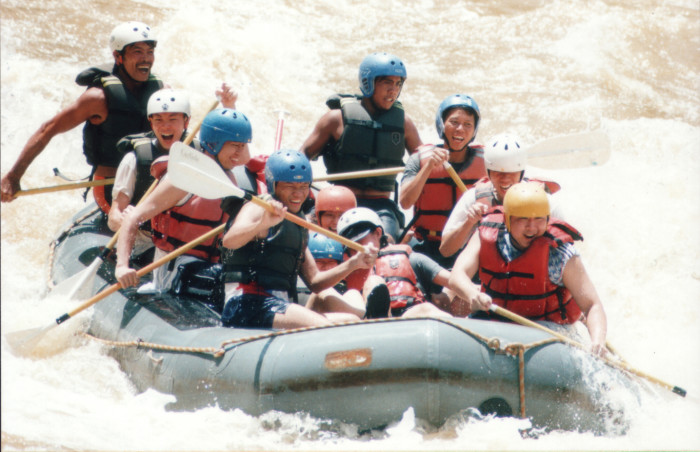 Explore Amazing Sabah
Come and explore Sabah, Borneo, the ‘land beneath the wind‘. Beside trekking Mt.Kinabalu (4095.2), Sabah has an astounding array of other beautiful sites and adrenaline adventures for those not seeking to climb the mountain.

Padas River Rafting is situated in the interior of southwestern part of Kota Kinabalu that is only accessible by train (used since the late 19th century in Borneo). Basically, this trip will give you two experiences advantages – 1) Excursion of Class III-IV river, 2) A uniquely ride in an antique train and suitable for aged from 12 to 55 years old. The adrenaline rush excursion covers a distance of 9km of this rather muddy 200 km river that holds 7 exciting and tough rapids! These rapids carries amusing names such as Merry-Go-Round Rapid, Break Point Rapid, Scooby Doo Rapid, Cobra Rapid, Curve Rapid, Lambada Rapid and Head Hunter Rapid. Each rapid will give you the feel of the motion as what the name means.

The journey will first take 1.5 hours overland through the countryside to Beaufort town. From thereupon, adventure begins with 1 hours train rides tracks along the Padas River that gives glimpses of the thrills and excitement to come.

Upon arriving at the starting point, participant will be given safety briefing before going down the river. The ultimate challenge will speak for itself as one shoots through and experiences the nerve tingling excitement which crescendos rapid after rapid while getting a closer look at the Borneo’s amazing flora and fauna. After rafting, enjoy a sumptuous barbecue lunch by the river. Wind down with a sunset view of the return journey to Kota Kinabalu, along with presentation of certification of achievement.

Tunku Abdul Rahman Park (TARP) consists of a cluster of islands comprising Pulau Gaya, Pulau Sapi, Pulau Manukan, Pulau Mamutik and Pulau Sulug. The five islands of the Marine Park are characterized by shallow waters, sumptuous coral gardens and all boast splendid white sandy beaches. The islands of Sapi, Manukan and Mamutik lure in and tempt tourists from all over the continents, thanks to its colorful coral reefs and diverse marine life. Immerse yourself in the crystal clear waters or bask in the sun with a book in your hand while enjoying the island life.

Pulau Tiga was the location for the first season of the popular reality TV series, ‘Survivor’. It is about 10km offshore on the west cost of Sabah. Pulau Tiga offers many wonderful activities – swim or snorkel in its crystal clear waters or go diving to explore its amazing marine treasures. The island is also renowned for its therapeutic natural volcanic mud. Visitors looking for an adrenalin rush will not be disappointed as Pulau Tiga is touted to be home to various species of snakes.

Located on the Klias Peninsula is the Klias wetland, a Mangrove Forest Reserve is 2 hours south of Kota Kinabalu. With the bizarre-looking proboscis monkey gaining as much popularity with the tourists as the orang utan, the Klias Wetland with its large proboscis population is fast becoming the latest ecotourism destination in Sabah.

These tree-dwelling animals normally hunt for goods in the late afternoon & evenings, they can be easily seen on a slow boat cruise. Other riverside residents that may be spotted are macaques, crocodiles, monitor lizards, tree snakes and birds such as the eagle. Back on the jetty, enjoy a natural light show when hundreds of fireflies put on a glowing performance for your benefit.

Rafflesia
Raflesia is the largest flower in the world. Sabah is lucky because this state is where the Rafflesia live. There are 3 types of Rafflesia that can be found in Sabah:

You all can find and see Rafflesia alive at Rafflesia Center. There are several known sites, such as Poring Hot Springs at the Kinabalu Park which are fairly accessible. But one particular place where this unique flower, especially Rafflesia Pricei species occur extensively is a 386 acres Tambunan Rafflesia Reserve which is sited in a forest reverse consisting of a mixture of temperate oaks, chestnut type and highland dipterocarps forest. The Tambunan Rafflesia Reserve is located conveniently by the roadside of Kota Kinabalu/Tambunan Highways and is only 58km from Kota Kinabalu. At the entrance of this reserve is a Rafflesia Information Centre. There are eight trails for trekkers including a Rafflesia Trial that leads to the flowering sites.